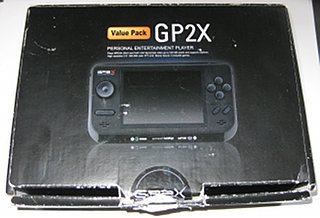 This is my GP2X. Well, strictly speaking it's the cardboard box it lives in, but as that's got a picture on the top you get the best of both worlds! As you can see, I have the Value Pack; this consists of an F100 Mk2 console with firmware 3.0.0. There are a few help videos and three and two halves games built in* plus a few bits and pieces: some GP2X-branded NiMH rechargeables, a very basic pair of branded earphones and a soft pouch. There's also a printed Quick User Guide and a fuller guide on CD. There was originally a hand strap as well, but that had gone missing by the time I bought my console.

* Advertised as five, but in fact it's three full games -- FluboPuyo, Noiz2sa and Supertux -- and two demos -- Payback and Vektar. The latter is a special build for the Value Pack, but it still ain't the full thing... though actually that's freeware anyway now, so the point is moot.
Posted by Logan at 19:22