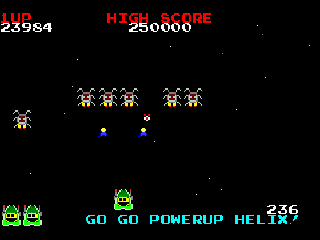 Description
Shippy 1984 is a space-based shooter with strong echoes of the arcade machines of the early 1980s. If you've ever played something like Galaga (and if you're a GP2X owner, surely you have) then you'll feel at home pretty quickly. There's no complex underlying plot: Galaxian starts with a simple MISSION: DESTROY ALIENS and the same applies here: just blast away, avoiding alien bombs and helping yourself to the odd power-up. There is a countdown timer, but if it reaches zero you don't die; you just don't get a level bonus. That doesn't mean you can relax, though, as those aliens are coming down the screen towards you...

The game's retro atmosphere is very much an integral part of the experience: in a fun touch, you even get that infamous "Winners Don't Use Drugs" FBI splash screen at the very beginning. (Yes, I know that was American, but most of us over here know about it too these days.) The game was originally written for the PC by Ryan Broomfield; its name varies a bit across platforms, and even here it's written "Shippy84" in the readme. I've put "seb" as the author of this version since that's what the readme is signed and it was the only name I could find!

Addictiveness: 7
It's not often I say this about this type of game, but Shippy 1984 may be a little bit too easy, early on at least, to be truly captivating. The first time I played I got through several levels without losing a life without trying hard at all. It is a bit more of a challenge later, as more and more aliens appear, so if you stick with it for a couple of levels you should find yourself having more fun.

Depth: 5
It's an old-school endless space blaster; what did you expect? In all honesty, Shippy 1984 is probably better for not trying to be too clever. It does offer a little variety as the levels go by, and the presence of the few power-ups helps, but it's no Elite.

Controls: 7
The stick moves you around, A shoots and Start pauses; most people should be able to remember that! The ship is responsive enough, and (if you're better at the game than me) you should be able to dodge bombs pretty nimbly. Select quits the game: as it's instant and non-recoverable, I'm not wild about the lack of any confirmation screen there.

Graphics: 7
I'm not that sold on the odd design of your ship, which looks like a green moth with a small yellow smiley stuck to its top, and occasionally text superimposed on aliens is a little hard to see, but most of the rest is better. The font used for the score display is reminiscent of that used in the likes of Galaga, while the aliens themselves, their bombs and your missiles also feel right; they all move nice and smoothly, too. I enjoyed the messages like GO UNLIMITED BULLETS when you pick up a power-up.

Sound: 7
Right at the start there's a mid-80s style (ie rather laboured) speech synth of the game's title. I can't really see the point, to be honest. The in-game sounds and music are really pretty good, though: they certainly have the feel of that era's arcade machines about them. And, for once, through headphones the default volume is merely "too loud" and not "eardrum-shattering".

Documentation: 4
There's very little in-game, and what does exist is confusing: for example, when the game is paused you're told it's "belated". Why, I have no idea; perhaps it's (deliberately?) odd English from the original Shippy game. There is a very basic readme, which will get you started, but through no fault of seb's own the site it refers to is no more.

Completeness: 6
seb himself says that this is a "quick and dirty port", and that's obvious in the way that the instructions still refer to the CTRL key and "button 1". The game itself isn't lacking too much, though; offer selectable difficulty and put in an instruction page and there'd be little to complain about. Even a high-score table doesn't seem necessary for an old-school game like this one.

Overall: 7
It's perhaps too easy to say, "If you like Galaxian, you'll probably like Shippy 1984", but it's not any the less true for all that. I had some trouble deciding whether this was a 6 or a 7, but in the end its nicely executed retro feel just helped it to the higher rating.
Posted by Logan at 00:08