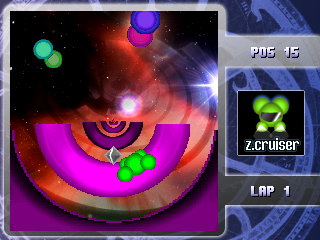 Description
ztunnel (as far as I can tell it's all lower-case) is one of surprisingly few racing games to have been released for the GP2X. It was written for a coding competition in 2007 -- and, like many such games, has unfortunately not been updated any time recently. You pilot a spaceship and must win races against similar ships in order to proceed across a grid: after completing one race, you get a choice of where to go next. (Remember Blockbusters? Well, not exactly like that, but close.)

The courses are tunnel-like (hence the name) and twist about, in some cases even going upside-down. If you leave the track you won't crash, but you will lose a great deal of speed. It can be hard to get past blocking ships, so make use of the missiles (diamonds) you can collect and blast them out of the way. There are also golden coins, which if collected will give you a brief burst of extra power -- in both speed and the ability to pass through other ships.

Addictiveness: 8
Okay, I'm a racing game fan, so predisposed to like this sort of thing, but ztunnel passes the acid test: when I just failed to qualify for the next round, I didn't get annoyed and quit the game; I had another go. And then another. Good stuff.

Depth: 7
Okay, it's not the sort of game you'll get lost in for weeks, but you can certainly develop and refine your tactics as you go along. The large number of courses available (25) and the choice of routes over the grid doesn't harm that at all, and there's even the odd secret to discover along the way.

Controls: 8
Left, right, brake, fire. That's it: your ship goes at full speed unless you actually brake. You can use stick or trigger buttons to steer, which is nice. Pause is Select, while Select and Start together quit the game. There's a useful intro screen explaining it all.

Graphics: 8
Pretty good, all told. Your ship (like the others) is just a few spheres stuck together and painted a neon colour, but I've got no problem with that. The track is generally clear enough to see, the weapons are sensibly coloured and the starry background is easy on the eye. It all dashes along at a great pace, too.

Sound: 7
The title music is fine if rather forgettable; as usual, you'll want it turned down almost to nothing if you're wearing headphones. The engine noise is a bit whiny, but it's no worse than in an awful lot of other similar games. Weapon and power-up effects are vaguely sci-fi-ish, which works well enough.

Documentation: 2
Almost non-existent, with not even a couple of lines on the OHH site: apart from the screen explaining what the various buttons do, you have to figure out the rest as you go along -- which doesn't take long, but is a bit frustrating.

Completeness: 7
The documentation issue loses ztunnel a little bit of a score here, as does the lack of a savegame facility. The core game is pretty well finished, though.

Overall: 8
I like ztunnel a lot. There aren't many racing games on the GP2X (unless you count the emulated ones!) and so it's nice to come across one that's genuinely enjoyable. It's very reminiscent of a DOS-based game from the early-mid 1990s, but I can't remember which one! Certainly worth a spot on the ol' SD card, this.
Posted by Logan at 23:42