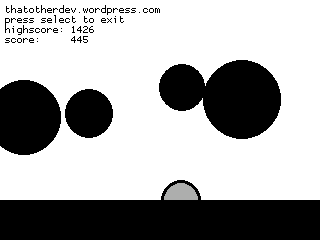 Description
As you might imagine, GP2X game development has slowed to a crawl in recent months as newer systems have attracted developers. After all, this has never been a mainstream console, so just a few people moving on can have a disproportionate effect. However, there are still things being written for the GP2X, and Dont Get Crushed (which for some reason has no apostrophe in its name) is one of the most recent releases available at the time of writing.

It's a simple, monochrome clone of the iPhone game Falling Balls (though the author states they have never actually played that). You control a grey semicircle at the bottom of the screen. Black balls of varying sizes bounce out of the left-hand side and across the screen; your task is to avoid any contact with them. You only get the one life: the moment you are touched by a black ball, it's game over. Oh, and things speed up once you get to 1,000 points...

Addictiveness: 5
My heart sank when I first saw Dont Get Crushed and its extremely basic design, but actually there's some replay value here, especially as each game will take a couple of minutes at most. It's definitely satisfying to break a score landmark.

Controls: 5
About as simple as it gets: move your semicircle with joystick left and right, and quit the game with Select. They work fine, though it's a shame there's no pause button.

Graphics: 4
You couldn't call Dont Get Crushed's appearance lovely by any means. "Functional" would be a better word. It's entirely in black, white and grey. While playing, you see the writer's URL, a note about how to exit, your current score and the high score.

Sound: 6
This consists of a background music track called "Bunny on the Moon". (Yay!) Almost inevitably it's techno themed (why are game designers so obsessed with that genre?) but as it's almost three minutes long it doesn't get too repetitive; indeed, you're unlikely to reach the end of it before losing the game! Default volume is far too loud for headphones, but Dont Get Crushed is by no means alone in that.

Documentation: 3
Nothing on-screen apart from how to quit; no readme in the download. A couple of sentences on the OHH download page, but really that's all you need. You could figure it out pretty quickly without it, but I would have liked to have seen some sort of readme file at least.

Completeness: 5
Tricky to rate. It's about as basic as you can get while still being a playable game, but a playable game it certainly is. Colour, more sound and so on might be nice... or would they take away from the simplicity? A high-score reset, if not an actual table, would be very welcome, though. And proper documentation, as mentioned above.

Overall: 5
Dont Get Crushed is highly reminiscent of the games you got on mobile phones the best part of a decade ago. That's not entirely a criticism, though: there is a place for utterly simple amusements that don't need a PhD to learn to play. This one may be a bit too simple, but it can keep you diverted for a few minutes.
Posted by Logan at 00:53