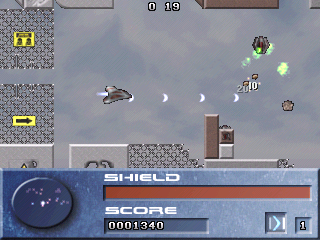 Description
Blazar is a side-scrolling space shoot-em-up of the type very familiar to most console gamers. It has a simple "stay as live as long as you can" object of the old school: there are no levels, no missions and indeed no way to win outright; all you can do is to beat the high score. You can see enemies on a small radar in the corner of your screen. This is a demo version, which has a (pretty mean) two-minute time limit. I've no idea what the full version cost, as the relevant page to buy it is no longer working.

Addictiveness: 5
This is very hard to rate, because two minutes simply isn't long enough properly to assess the game's qualities. After a few plays I did still find myself frustrated that I couldn't give it a longer go, which does suggest that if I owned the full version I might well enjoy it, but I can't give such a restricted version a very high mark. There doesn't seem to be a high score table (in the demo only?) which doesn't help.

Depth: 4
Games of this type don't really tend to have a great deal of depth, and Blazar is no exception. You just blast away, avoiding enemies and grabbing power-ups. There are at least a few different ones to find, though generally of the "weapons upgrade" type. The lack of a mission structure makes it a bit more of a mindless blaster, though.

Controls: 9
Pretty good, all in all. The stick moves your ship around, B shoots, Select toggles autofire and Start brings up a pause/quit dialog. You can redefine the buttons (or "keys" as Blazar rather strangely calls them) in-game, which is nice and something not seen often enough. Few complaints here.

Graphics: 7
First impressions are good, with the very impressive "E" Edge 3D logo looking great (though the "Powered by Edge" voiceover always drives me mad), and the menu appearance a little generic but certainly not objectionable. Once you're into the game, things perhaps drop a notch, with not quite as much polish (especially in your own ship's design) as you might have a right to expect from a commercial game, but they're still not at all bad. Pleasingly, animation is very smooth and doesn't drop noticeably when there's lots going on.

Sound: 7
Bleepy, futuristic, mildly techno-ish tunes. Nothing that's going to make you scream in disgust, but nothing you're likely to remember for more than 30 seconds after you quit either. Missiles, explosions etc sound pretty much as they would on a 16-bit console game, and that's fine by me. On the plus side, volume can be controlled to be entirely acceptable through headphones, somewhere too many games fail.

Documentation: 7
In-game, there's a simple text-file style set of instructions, which is pretty clear and covers all you need to know to get going -- though there's no mention of the two-minute time limit in the demo! The so-called readme in the downloaded archive, though, consists of nothing but a standard (ie ludicrous if you actually read it) boilerplate EULA; there's no useful information in it at all; not really good enough.

Completeness: 8
The game mostly seems to be present and correct, though it's hard to tell with such a tight time limit. (Yes, I know I keep mentioning it -- but it's so annoying that it's hard not to.) "Assign Keys" is an odd choice of wording, but I'm awarding the game a good score here as I didn't see anything major that was missing other than in the lack of a proper readme file.

Overall: 5
Blazar seems to be a pretty decent shooter. Whether or not it was really good enough to be a commercial title is another matter; personally it feels to me more like a rather superior freeware release. It's hard to tell, though, with -- here I go again -- that two-minute time limit; that's simply too restrictive to make your mind up about something you're being asked to pay for. In an "endless" game like this, going down the usual route of giving you one or two free levels isn't possible, but I'd have thought five minutes would have been a fairer time limit. This is the reason why the overall score is so much lower than most of the subscores.
Posted by Logan at 00:47