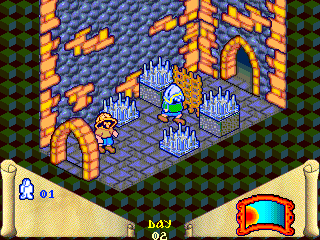 Description
Knight Lore is a remake of the classic 8-bit (most famously, Spectrum) game of the same name, published in 1984 by the renowned Ultimate Play the Game software house. In it, you take the part of Sabreman (also the hero of the previous -- but not GP2X-remade -- Sabre Wulf) and must explore an isometric-3D labyrinth full of traps and puzzles in order to retrieve the items you need to bring to the local wizard in order to cure you of becoming a werewolf each night!

It's not as easy as that, of course. There's a time limit of 40 days, and if you don't complete the game by then you've had it. You start with a mere three lives (although a few 1-ups are dotted around the place) and they really are easy to lose. The isometric perspective adds a new dimension (ho ho) but it also brings danger, as it makes it easier for monsters and the like to hide! If you die, you'll be shown a brief, and often rather depressing, summary of how well you've done.

Addictiveness: 8
This is certainly a game you'll want to come back to after you've failed (as you will) on your first attempt. It looks great (more on that later) and has an excellent, immersive atmosphere, with a wide range of fiendish puzzles to work out. So, why "only" an 8? Simply, it's just too difficult for all but the most committed players. It's a good example of why 8-bit games are commonly considered harder than today's equivalents: the Spectrum's "infinite lives" cheat was heavily used... but it's not available here!

Depth: 8
The day/night split leading to human/werewulf switching (which is vital to appreciate if you want to win the game!) is an interesting touch. The 40-day time limit, on the other hand, stops this from being a game you can really stop and think about as you go through, in the way that you can with another 8-bit classic, Head Over Heels.* Another plus, though, is that you don't always start in the same room, and neither do the items you're seeking. Finally, you can choose in the menu whether to require 14, 21 or 28 charms to win. This gives Knight Lore replay value beyond just "finishing faster" even if you've already beaten it.

* For what it's worth, Head Over Heels would rate a 10 here -- as it would in most other categories -- if only a GP2X version had been made. We'll just have to make do with the emulated Spectrum version, which isn't a bad substitute.

Controls: 8
The stick moves you around, then there are buttons: B for jump, X for pick/drop and A for jump+pick/drop. The trigger buttons rotate you. Start pauses the game and offers you the chance to return or quit; sensibly, the first is the default. Y and Select are unused, though I can't see what's missing that they could be used for. Anyway, it all works okay, though remembering the jump/pick/drop combinations can be a bit of a pain, especially at first.

Graphics: 9
Hard to fault here. You get the initial loading screen (albeit with "Mutilate Kill and Maim" instead of the original "Ultimate Play the Game" logo; I'm not too keen on that, personally) and the font used in the main menu is just right. The in-game graphics haven't strayed too far from the original's, and anyone who's ever played Knight Lore would recognise it in a second, with the enhancements in terms of colour and resolution (for example, in the sun/moon display at bottom right) not being distracting.

Sound: 7
Pretty decent, all in all, and nothing that feels too overblown for what is, after all, at heart a Spectrum game. The plinky-plonk background tune, though the same as in the original, gets annoying after a little while, and I tend to turn it off. The effects are much better, and the "whoo-ooo" of the ghost is particularly fun. The one exception is Sabreman's footsteps, which drive me mad -- they're somehow much more irritating than the Spectrum's beepier version. As usual, even the lowest volume setting is a little too loud for headphones and the default is deafening.

Documentation: 8
You can access the original "The Mist Tunes" (a pleasantly semi-cryptic verse giving an idea of the object) from the game menu; and there's a reasonably clear, if rather short, summary on the OHH page as well. The score here would have been higher if there'd also been a readme including "The Werewulf" background text (the one that begins "My journey's end is near").

Completeness: 9
As with some other accomplished GP2X games, Knight Lore would have scored a full 10 here if only there'd been just a tad more documentation. Everything else seems to be present and correct, though as I haven't actually finished the blasted thing I can't be absolutely sure about the ending!

Overall: 8
This is a satisfying and well-crafted remake of a game fondly remembered by a generation of Spectrum (etc) owners. Its rock-hard difficulty level makes it rather inaccessible for the casual gamer, however, and newcomers will need to persevere to get anywhere. The graphics are wonderful, the attention to detail is great and the sound... well, it's not perfect, but it's at least good. Fans of the original will lap this up.
Posted by Logan at 16:48