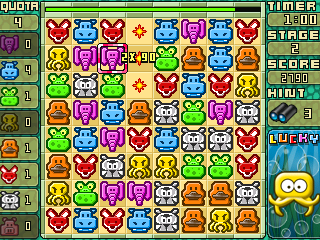 Description
Animatch is a puzzle game similar to the Nintendo DS title Zoo Keeper. You are confronted with a board full of different animals (well, the heads thereof) and must make rows (or columns) of three or more of the same species. This is accomplished by swapping one tile with the one next to it horizontally or vertically. In the Normal game, you must make a certain number of rows of each animal, which increases as the levels progress -- and all the while a timer is ticking downwards; if it reaches zero, it's game over. To help you, it's green when there is plenty of time left, then yellow, orange and finally red: in the final period the animals themselves will shake! Making rows, however, does give you a few seconds extra time.

As well as your quotas, you make a conventional score by completing rows: a row of three gets you 90 points, one of four gets 160 and one of five gets 250. On each level there is a "lucky" animal; rows of this species score double! You can boost your score even further by completing "chains": animals you match disappear from the board and those above them slide down (with more being added from the top to keep a full board); if the new setup makes another row, that will score double its normal points, a third will score triple, and so on. In each game you can ask for three hints: requesting one will make potential rows flash. Occasionally a wildcard will appear: when selected, this stops on a certain animal and all tiles of that type will be removed from the board. If at any time there are no possible moves, the program will detect this and give you a new board -- pausing the timer while it does so.

There are two other modes: Time Attack, in which you must score as many points as possible in five minutes; and Score Attack, in which your task is to score 20,000 points in the shortest time you can. In each of these there is a Normal mode (with seven different animals) and a Hard mode (with eight). Adding those to the Normal game described earlier -- in which there are eight animals, though another one is added if you get as far as level 10 -- gives a total of five different challenges, all of which maintain a top-ten high-score table complete with name display.

Addictiveness: 10
When getting the screenshot for this review, I meant to just take the shots and then quit. Some hope. Animatch is a hugely addictive game, and although it seems like a diversion to fill an idle five minutes you could easily find yourself, after a few goes, wondering where the last hour went. The selection of game modes stops it from getting samey, and getting on the initial high score tables is attainable without being insultingly easy.

Depth: 8
For what on the face of it is a simple puzzler, there's a surprising amount of thought needed to do well at Animatch. You need to think quickly to assess which move is best -- it's not always the obvious one -- and as you progress in the Attack modes especially you'll come to appreciate the importance of chains.

Controls: 10
Simple but effective: the stick moves the cursor around the board, and the B (or Y) button followed by a stick direction swaps tiles. You press A for a hint, and Start to pause. While paused, L+R will quit; this guards well against accidental pressing. Being able to adjust cursor speed in the main menu is a really nice (and unusual) touch. It's all extremely easy to pick up, and there isn't a single place where it gets in the way. In the high-score table you enter your name via a very clear virtual keyboard; one up on the usual three-letter initials selected with the stick!

Graphics: 10
Absolutely gorgeous: the intro screens promise much, and Animatch delivers. The main board is bright and colourful, and the animals are all easy to tell apart. The menu screens look really nice, too, and the high-score entry screen has its own feel (vaguely reminiscent of that for Out Run, actually!) which speaks of a game that was obviously a labour of love. The little animations, with the animals going all wide-eyed or waving tentacles when you make a row, are bound to raise a smile, too.

Sound: 10
Truly superb. The music tracks are by Pat Ferguson, who clearly knows what he's doing. They have a cheerful, bouncy feel but don't get in the way of your concentration at all. The sound effects when you complete a row, level up and suchlike are all fairly simple, but again they're very easy on the ear. I often get irritated by puzzle-game sound; not on this occasion. You can even adjust music and sound-effect volume (independently!) in the menu.

Documentation: 8
There's a brief one-line summary of each game type (and other menu option) as you select its icon, but full instructions are in a readme file. This is a model of its type: clear and comprehensive, but without including unnecessary waffle. A full in-game help screen would have been nice, but this game is so good that I almost feel churlish saying so!

Completeness: 9
Is there anything, apart from that in-game help screen, missing? If so, I couldn't find it. This is a really polished game that has no obvious rough edges whatsoever. You get the impression that a great deal of commitment was put into its creation, and it shows.

Overall: 10
Animatch is a hugely likeable game, and one which every GP2X owner should possess. It says something that the only "bug" I could find was a footling one: the mis-spelling of "amount" as "ammount" on the credit screen that shows when you quit. This is a game you could happily show off to anyone who doubts what can be done on our little console, and it could quite easily have been a commercial title. An absolute must-have.
Posted by Logan at 19:38