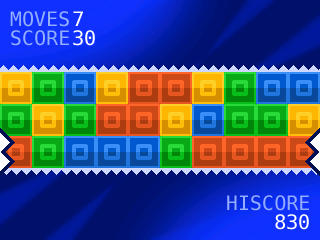 Description
Blix2x is based on the original Blix game by Nick Kouvaris. It's a simple puzzler: confronted with three rows of coloured tiles, you must shift rows (individually) left or right to try to make vertical lines of tiles of the same colour. You have a limited number of moves: to start with this is set at six, but each time you make a move this decreases by one. If you match a column, your score increases by one instead. (Actually two, but in effect one because of the usual move cost.) However, you can never have more than 12 moves available. Tiles in a matched column are instantly recoloured at random.

This is a pure tactical game: there's no timer at all. You get 10 points for matching a column, but if you manage to match more than one in a single move your score will increase much more rapidly: for example, two columns bring you 40 points. The game ends when your number of available moves reaches zero. A high score is retained, and shown in future games at the bottom right of the screen, but sadly there is no facility to enter your name or initials.

Addictiveness: 7
I've certainly found myself playing Blix2x more than I originally imagined I would. As it only takes a couple of minutes to play it's really useful as a time-filler, and the "just one more go" factor is definitely in evidence. It's not in the Tetris class in that respect, but then what is?

Depth: 5
There's not a great deal to Blix2x, but it's a little less simplistic than it appears at first glance. You need to keep an eye on your move quota and think ahead... and sometimes go for the desperate gamble of hoping the colour you really need is just waiting to be scrolled onto the screen!

Controls: 9
You only need up, down, left and right, but I really like the way that Alex has given the user choice: you can use joystick or the buttons or a combination to move. Start pauses the game: from the pause screen pressing Start again will return to the action while Select quits. Fine.

Graphics: 8
I like the visual presentation of Blix2x a lot. It's a good example of a game that doesn't need flashy animation or explosive effects to look good. The game screen is bright and colourful, and the sawtooth animation along the edges reassures you that the console hasn't crashed. The dark blue background is quite subtly patterned and doesn't distract.

Sound: 3
There's no music; just a few different types of boings and bleeps. They're not at all offensive, but Blix2x can certainly be played silently without losing much at all. It is nice to see a game that doesn't have a stupidly loud initial volume when played with headphones, though.

Documentation: 6
Nothing in-game other than explaining how to start/pause/quit with Start/Select. The readme file is quite short but covers the basics adequately.

Completeness: 7
The main game is pretty polished: most of what could be added is nice-but-inessential stuff. Selectable difficulty levels would be easy to implement: allow the player to change the initial move quota, as well as whether the 12-move limit should stay. A full high-score table would be nice, as would a way to reset the high score. I rather like the lack of a timer -- too many puzzler authors seem to think they have to include one -- but some might like an alternative "arcade" mode.

Overall: 7
Blix2x is a nice little diversion that demonstrates the lack of necessity for GP2X games to be technically stunning in order to be enjoyable. It can be picked up in a couple of minutes, and is easy on the eye. Worth a look.
Posted by Logan at 02:57