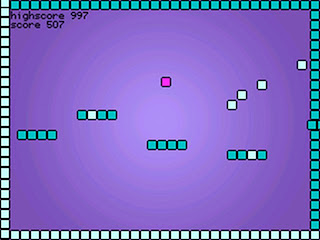 A while back, I reviewed Dont Get Crushed, and Super Pixel Jumper is by the same author. It's another fairly recent game, dating back just to this spring, and of course it's always pleasing to see continued GP2X development.

Description
This is a pretty simple game in terms of rules: you play the part of a little pink square, and must jump along a side-scrolling landscape of platforms made up of blue squares. As you continue, the scrolling gets faster. You must avoid touching the white squares which are scattered randomly around (and on the left and bottom sides of the screen) because doing so means game over. Your running score and the high score are always shown as you play.

Addictiveness: 7
There are some games which look as if they ought to be addictive but turn out not to be. Super Pixel Jumper goes the other way: it doesn't look that exciting in a screenshot, but the compulsion to better your score is high. I certainly found it holding the interest for longer than Dont Get Crushed did, perhaps because it's rather similar to "Rapid Roll", a favourite game of mine from an old Nokia mobile phone.

Depth: 3
Let's face it, there's not a lot of this. You run along, jump, and avoid enemies. You need quick reactions, but not much in the way of strategy. The only real development as you play is in learning how to judge the size of your jumps.

Controls: 6
Nothing much to remark upon here. Stick for left and right, and B to jump. Holding down B for longer gives you a bigger jump, which works well. There's no pause, but Select will exit:The animation is decent, too instantly, with no confirmation screen, which is a bit irritating. Between games, Start is used to... er... start.

Graphics: 7
We start with a splash for the "Pandora Angst Coding Competition", but after that everything's simply done; again, it's reminiscent of a mobile phone game. The addition of colour, even simple colour, puts it one up on Dont Get Crushed and makes the thing look significantly more attractive. The basic square-based design (hence the game's name) actually works very nicely. The animation is decent, too. One small criticism is that it's not that easy to see your score, as it's in black on a purple backround.

Sound: 5
Do I need to tell you that it's initially too loud through headphones? No, thought not. Still, you can turn it down. The background music is a looped techno sample, surprise surprise, and frankly I wasn't keen on it at all. Personal preference, of course, but then that's what reviews are for. (Mind you, it's just a .wav file, so presumably it could be changed easily enough.) Actual sound effects are limited to a few whooshy noises: two for take-off and successful landing, and one (which is disconcertingly cheer-like) when you are obliterated by a white square.

Documentation: 2
Pretty much non-existent: even knowing to press B to jump is something you have to discover for yourself! No readme and nothing in-game other than a mention of the Start and Select buttons.

Completeness: 7
Most of the way there, I think; I'd like to see something approaching a readme, at least, but the basic game doesn't show any serious weaknesses in this department.

Overall: 6
Super Pixel Jumper is another ThatOtherPerson game which makes a virtue out of simplicity: you can pick it up in seconds and yet keep playing for a while before you get bored. It nearly scored a 7, actually, but I really don't like the music at all. If you do, adjust my rating accordingly!
Posted by Logan at 17:00