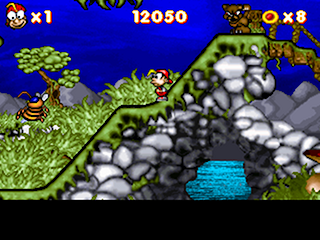 Description
First, note that I'm going by the title used on the OHH page, but the title in-game is The Castle of Dr. Malvado. In this review I'll just call it Malvado for simplicity's sake. Anyway, this is a port of an old DOS side-scrolling game, via the GP32. It has much the same object as most of these games: collect coins (or whatever they're supposed to be) and either avoid or squish monsters as you make your way through the levels.

Addictiveness: 7
My main problem with Malvado is its toughness; this one seems to be aimed at old-skool gamers who have the superb reactions and skills needed to get very far. It took me a long time before I even managed to get beyond the first couple of minutes without dying, something it's extremely easy to do: falling in the water will do it, for example, as will being stung by a wasp. It's a nice enough game to keep me coming back, but the first level is a lot harder, even early on, than the equivalent in any Super Mario game.

Depth: 6
It's pretty rare for any side-scrolling platformer to be astounding in this category; Super Mario World has a claim to be, but then that's among the greatest of all console games, in whatever genre, and Malvado doesn't quite measure up to that mighty opposition. There are bits and pieces to discover as you move along the levels (not least which bits of scenery you can stand on!) but the running and jumping come first.

Controls: 7
You start the game with Start (something which seems surprisingly rare!) and the stick moves you around. The only other control is jump, for which you can use either A or Select; I'd personally find B more comfortable, but you can't redefine the layout. Pressing L+R together will quit, without a conformation screen. There doesn't seem to be a pause control, which is unusual and irritating.

Graphics: 8
The first thing you notice, apart from the cheerful (and Spanish!) credits pages, is that the game doesn't fill the screen: this is because the original DOS graphics were 320x200, and that resolution is used here too. It's mildly irritating, but nothing you can't get used to. A shame it wasn't centrally "letterboxed" rather than being shoved up the top, though I don't know how easy that would have been to program.

The actual graphic design is very good. Malvado is a really attractive, bright and colourful game, quite reminiscent of the look of some 16-bit console titles. Scrolling and animation generally is excellent and smooth, and it's easy to distinguish between different items. The only real problem (though it may be deliberate design) is that you often lose your character behind grass, signs etc, thus increasing the risk of losing a life.

Sound: 7
Not bad at all. Although (as usual) it's a bit too loud for headphones users straight off, you can easily turn that down with the normal volume controls. The main music is a jaunty little number which is clearly based on some nursery rhyme, TV theme or similar that I simply can't bring to mind right now. The tune used for the actual gameplay is different, but similarly bouncy and vaguely forgettable. Sound effects are okay without being stunning: bloops when you collect coins, screams when you die, etc.

Documentation: 3
Malvado falls down rather badly here: the readme tells you a fair bit about the port, but nothing at all about the game, other than how to quit -- and even that isn't quite right: it states that L+R+stick will quit, but actually L+R alone will do it, at least on my F100. There's no documentation whatever in-game, though to be fair it's not really needed.

Completeness: 7
The core game is fine, and my only complaints with it are that it's too hard; that's partly down to my lack of skill at games like this, though, and isn't a completeness issue as such. The documentation could do with considerable improvement (like actually having any to speak of...) and localisation of the credits, level screens and so on into English would have been nice.

Overall: 7
Malvado is a good example of a game that looks really nice, has obviously had plenty of work put into it and does most of the basics right, but which doesn't quite have that something extra to lift it above the "pretty good" and into the realms of the truly great. I'd prefer a less unforgiving difficulty level early on, a bit more clarity about where to stand and much better documentation. I could see a tweaked version of this game scoring 8 or 9 without too much trouble, but this is merely a solid 7.
Posted by Logan at 00:55