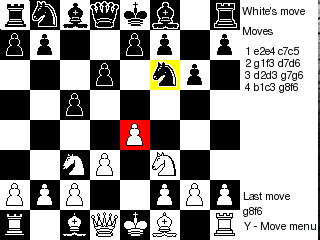 Description
This is a chess program (surprised?) using the popular GNU Chess engine and XBoard. I wasn't entirely certain about the licensing, as there wass no specific mention of which licence the program has in its documentation, but ParkyDR has confirmed that it's GPL; this is mentioned explicitly in the source listing. At any rate, this is very much aimed at people who simply want a game of chess without too much extra paraphernalia.

You can choose to play against the CPU (as either white or black) or to use the program simply as an electronic board to record the movements of two players. While playing, a graphical display shows the location of the last piece moved by your opponent, and a side display gives a summary of the game so far in standard algebraic notation. It's possible to take back your last move, and the CPU can be told to give you a hint.

Addictiveness: 7
This really depends on how interested you are in chess. As there aren't that many bells and whistles, it's a case of "if you like the game, you'll like this". Since I do like chess, I'm rating Chess2X fairly highly here!

Depth: 9
There are 10 difficulty levels, which seems a fair number. On the lowest setting the game is a bit of a pushover for all but the very weakest players, but if you push the level to the top it's likely to make even a good club player sweat. Chess, of course, has plenty of depth of its own, and so this is a game which is not likely to pall.

Controls: 6
In the menus there's a useful strip at the bottom of the screen telling you what different buttons do. In the game itself, it's as simple as can be: the stick moves the highlight square around, while B selects and moves your chosen piece. Start quits (after an "Are you sure?") but this is not stated on the board screen itself. X will force the GP2X to move; useful, as in the higher levels it can otherwise take ages to do so! The controls do feel slightly "sticky" at times, though; that's why this category scores only 6.

Graphics: 6
Quite a nice "crazy paving" background in the menus. The game board is, by default, a very plain black-and-white affair with simple symbols. I like it that way, but if you don't you can customise it to some extent: there are three other skins to choose from in the main menu. The symbols stay as they are, but the board colours change; the "wood" option is probably the nicest. Red, green and yellow highlights on squares show the plain cursor, a selected piece and the last piece moved respectively; simple but it works. The board doesn't quite fit the screen; there's an irritating messy line down the right-hand side.

Sound: 2
A rather nasty "blip" every time you move, and a nearly as nasty "bloop" when a piece is taken. I'd much prefer to play in silence, but the volume controls don't work.

Documentation: 5
Very little in the game. The provided readme is little more than a list of button commands, but that should get you going. It won't teach you to play chess, but I wouldn't expect it to.

Completeness: 6
This is v0.4, and in truth it sometimes feels like it. The program itself works, and you can play a decent game against the console. What's missing is polish: the default move/take sounds are horrible, the "sticky controls" thing is a pain and it doesn't seem possible to quit merely to the menu instead of completely. Another problem is poor "common sense" -- if you try to move an opponent's pawn to the top of its column, Chess2X will ask you what piece you want to promote it to and only then tell you you've made an illegal move!

Overall: 6
This is the first chess program I've tried on the GP2X, and to be honest I wasn't blown away by it. That's not to say it's terrible, because it isn't -- its solid score is testament to that -- but it could have been a good deal better. It's a shame that development ceased at this point, because I suspect v1.0 of Chess2X might have been a very good game indeed.

Update 18 Jun 2011: As well as confirming Chess2X's GPL status, Parky2X has mentioned a couple of other points, for which many thanks. First, during a game "Select" will allow you to quit or save a game. Second, pressing A will launch an audio player, but there's not enough CPU free for anything beyond low bit-rate files. Finally, the move_sound and take_sound files can be edited (or deleted) to change (or remove) those beeps.
Posted by Logan at 17:18