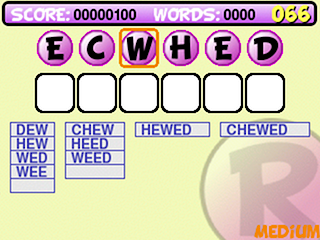 Description
REWORD (yes, unfortunately the ugly ALL CAPS appearance is official) is a word game based on a Flash game called TextTwist. It has vague similarities to the Countdown Conundrum: you are shown a six-letter word whose letters have been jumbled up, and must work out what the original was. However, you also need to find as many three-, four- and five-letter words as you can before the time limit expires. When the level finishes, you're shown any words you didn't get, and can also see their definitions.

The game offers three levels of difficulty: as you go up, the time limits decrease, and more difficult words from the wordlist are used. You score according to how many words you find and how much time you have left when completing a level. There are two additional game modes: Speed6, in which only finding the six-letter word matters (you can ignore the shorter ones) and TimeTrial, in which you have an overall time limit to find as many six-letter words as you can.

You do need to remember that the word list is a British English one: "colour" is a valid choice, but "color" is not! On a rather cruder note, that also means that "piss" is there, but not the Americanism "pissy" (meaning irritable). You'll also come across the occasional irritation, such as the fact that "yip" is accepted but "yips" (the golfing term) is not; you can either edit the wordlist to suit or just put up with it.

Addictiveness: 8
Given that this is by no means an easy game, even on the Medium setting, I think it will appeal mostly to those who are already into wordplay, and who have what might be called "the right sort of brains" -- ones which are good at picking out patterns against the clock. If you do fall into that category, though, then REWORD is a treat: the compulsion to do better than last time is strong, and you'll frequently kick yourself when at the end of a level you discover that you've missed some supremely obvious word.

Depth: 8
The wordlist contains about 7,400 words (including 2,800 six-letter words) which is enough to ensure that you don't come across the same puzzle too often. By no means all the words are obvious ones, and even those who enjoy word games or play Scrabble are likely to find their brains heating up somewhat, especially when playing at the harder difficulties. Even at Medium, I've had words like "arnica" showing up in the six-letter spot. REWORD also allows you to expand the wordlist yourself, so the game should have plenty of replay value.

Controls: 7
These take a little learning, as almost every button is used: B selects a letter, X deselects it, Y submits your chosen word for checking against the wordlist, and A shuffles your "tiles" (which can help you see things you didn't before). Either L or R will bring up the last word you submitted (handy for quick plurals if there's an S in the tile set). Space is a pause button -- but this works on Easy mode only! Select brings up the quit dialog -- but the clock keeps ticking, so if you want to resume, do it quickly...

Graphics: 7
The main game screen is simply but effectively done, and the pink-and-yellow colour-scheme works better than you mgiht think. The menus are well presented, and pretty easy on the eye. The high-score tables are perhaps slightly cluttered, but not overwhelmingly so. Overall, REWORD scores fairly well in the graphical department.

Sound: 6
The theme tune to the game is a bouncy little thing, and for once the default volume isn't horrible through headphones. The in-game effects are basically a little collection of beeps (including the dreaded ten-second countdown) but they serve their purpose.

Documentation: 8
REWORD does better in this department than many GP2X games: there's both a solid and decently clear readme and a good in-game instruction section. I'd personally have put the control quick-reference screen after the overall "How to Play", rather than before as is in fact the case.

Completeness: 8
For a v0.5 game, this seems pretty much finished. There is the odd six-letter word which you're told "has no definition", which is a pain, though if it bothers you that much you can edit the wordlist to add it yourself. The high-score entry is also slightly clunky compared to some.

Overall: 8
The only thing I really dislike about REWORD is its shouty name. The GP2X is not well supplied with word games (it's actually a genre I'd like to write something in if I ever get back to learning to program) so it's pleasing that this one is very nicely done -- though not easy! If you're a fan of word games and want something that will give the linguistic part of your mind a good workout, then this might well be what you're looking for. It's staying on my card, anyway.
Posted by Logan at 16:19