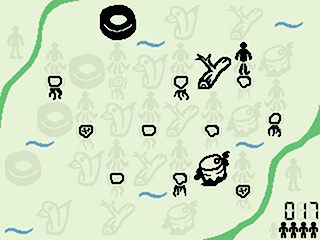 Description
This is a simple game reminiscent of those old Game & Watch handheld machines. You control a man who has to get across a river while avoiding obstacles -- shades of Frogger there. All you can do is to jump forward, but the key to the game is in the timing, as rocks may be slippy (requiring you to pause until you gain your balance) or sink (requiring speed) and you may be knocked over by swans and debris floating down the stream!

You start off with five lives, but you lose one every time you fall into the river. If you succeed in your crossing, you gain a life, though you can't go above the original five. There is a basic cheat mode -- pressing Start while on the first level will skip forward ten levels. However, if you activate this mode, your score display will note that you have been cheating!

Addictiveness: 7
I could see some people rating this higher than that, actually, as there's a definite "one more go..." factor at play here. Once you get past about the first dozen levels, there's a lot of frustration to be had as you get swept into the stream just short of your goal.

Depth: 5
For the first few levels you're discovering new obstacles, but after that it's really just a case of things getting more and more difficult. Game & Watch games weren't designed to be deep and complex, and neither is River Crossing.

Controls: 6
Extremely simple: you press Start to begin, B to jump and L to quit. That last option is unusual, and I don't personally like it that much as the way I hold my GP2X means that I can occasionally press it by mistake. As there's no confirmation dialog, it can cause problems. B is certainly the best choice for movement, though.

Graphics: 8
I rather like these, and they give a nice sense of the old machines. I particularly like the way in which non-active symbols are still faintly visible (as on the original LCD) and the attention to detail shown by the startup, when (again, as with the old games) every symbol lights up at once as a brief test mode, with your score showing as "888" in seven-segment display numerals.

Sound: 4
This scores poorly, despite having a suitably nostalgic bleepy feel, because not only is it far too loud through headphones, there doesn't seem to be any way to turn it down; even the standard volume buttons don't work. That's really very disappointing, and makes the game slightly but significantly less enjoyable.

Documentation: 6
Nothing in the game itself; a readme which is fairly brief but covers all the necessary details.

Completeness: 7
The core game is largely complete. It badly needs a volume control, and a level select other than cheat mode (maybe via a password system) would be good for experienced players, but otherwise anything to be added would be window-dressing.

Overall: 6
River Crossing is a likeable game, and one which I mostly enjoyed playing. There are rather too many niggles for a game given a v1 version number, that sound problem especially, but it's nevertheless worth a look if you're a Game & Watch fan.
Posted by Logan at 16:42