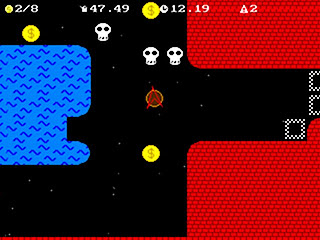 Description
Fy.WoD! was originally a Wiz game. It's officially described as "some kind of racing game", though you're in a race against time and the level itself rather than against other racers. You progress through a series of maps, the next one being unlocked when you have reached a set medal status in four categories: time, coins, "wall hits" and total number of points. You can then move around a "galactic map" to choose the route to your next map. If you don't get all your targets, you don't get to go on. It sounds difficult, doesn't it? Well, it is!

On each level you are shown a basic plan of the map and have to select how many units of fuel you want, from 0 to 100 -- it soon becomes reasonably clear why you shouldn't simply choose 100 every time (because your ship is heavier, and therefore slower) but as with rather too many other things about Fy.WoD!, it's very well explained either in-game or in the readme. Anyway, you then navigate your little ship around the map, collecting coins and trying to avoid bumping into the walls, while also perhaps making use of other phenomena such as speed-ups.

Addictiveness: 6
There's no doubt that Fy.WoD! has the potential to be a hugely addictive game, and its nostalgic 8-bit feel doesn't do this any harm at all. It's engaging and challenging to play -- but perhaps a bit too challenging. There are no difficulty levels, and you do rather feel that you're forced into playing it on "hard" at all times. For example, as soon as the second-level maps you can be faced with passageways barely wider than the ship. With a tweaked learning curve, so that the first few levels eased you into the game rather than becoming rock-hard after the first map, the game would certainly have scored higher.

Depth: 8
This really depends on how much time you're willing to spend on the game. As you progress, more complex maps appear, with extra features (such as the deadly skulls) and that always holds the interest. However, the game is so hard that you may well end up giving up in frustration long before you get to the (apparently) interesting thing that happens if you reach a million points. So, a high score here -- but in this case I'm not sure that's entirely a good thing!

Controls: 7
Stick left/right rotates your ship, and the B button accelerates. L acts as a sort of brake, putting the ship into slow motion. It's fairly easy to get used to, especially if you've played something like Asteroids. "Menu" (a Wiz-ism; it's Start for us, or Home if you have an F200) pauses the game -- this only works at certain points -- and brings up a menu. My main problem initially was that X, given as "Back", didn't seem to work at all; in fact it's actually used to back out of menus, whereas I'd been expecting it to give the actual ship a reverse thrust. Another bit of poor documentation.

Graphics: 8
These have a nice retro feel about them, being highly reminiscent of the better class of 1980s 8-bit computers. Actually, I could imagine a game very like this working well on my BBC Micro! The animation is somewhat like that as well: it's not absolutely silky-smooth, but it's close enough to make controlling your ship quite easy. I think the general look of the game suits it nicely, and that this is one of the most successful aspects of Fy.WoD!

Sound: 6
There's no music, and sound effects are fairly sparse but generally effective -- and they're not eardrum-perforating by default through headphones, hurrah! Your ship's engine sounds a little bit anaemic, but the explosion when you die is a pretty good one. Inoffensive is probably the best word to use here.

Documentation: 3
I was irritated by this from the (very basic) readme: "The rest is explained in the game or so easy to see, that I would waste my words on it." Sorry, but that's just lazy: it's simply annoying to assume that everyone will be able to see how to play a game as easily as you (the programmer!) can. For example, it is not entirely obvious at first how the galactic map is navigated. On the plus side, the little scrolling hints that appear at the start of each game are just right.

Completeness: 6
There are still a few translation errors to be ironed out: "uncompleten", "You hitted the death", etc, but that's minor. There needs to be better help (especially in the readme), too, and of course a more sensible learning curve and/or the choice to select an easier standard to start with, perhaps with lower scores as a penalty. The core game, however, doesn't really seem to need anything much doing to it; it's the difficulty that's the problem, not the gameplay per se.

Overall: 6
As you'll have gathered by now, inadequate documentation is easily the biggest flaw in what is otherwise an interesting, if perhaps too difficult, arcade game. Fy.WoD! has a truly ridiculous name, but then so did Sabre Wulf, and that did okay for itself. A potentially super game, but in its current form it's just too unforgiving for all but the most accomplished players and so is rated as only quite good.
Posted by Logan at 21:43