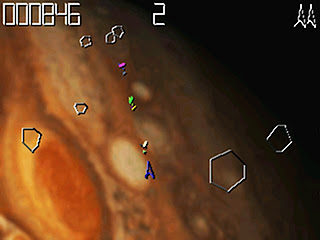 Description
Vectoroids2x is a port of, startlingly enough, Vectoroids. This in itself is a near-clone of the venerable Asteroids game from the year dot. The aim is pretty simple: you control a roughly triangular spaceship, and must blast away the large asteroids which drift about and threaten to destroy you. When you hit one, it splits into two, so later on in a level there are a lot of pieces of rock to avoid. You can both rotate your ship and use its thrusters to speed you out of trouble.

Addictiveness: 7
Not bad at all, but then it is basically Asteroids, one of the all-time classics of the early years of electronic gaming. Gameplay is very simple indeed -- you don't even get a hyperspace button in this version -- but that makes for good blasting fun. You won't play this for hours, but you might play it for a few minutes quite often.

Depth: 3
This category, on the other hand, doesn't fare so well. It's just level after level of firing away at ever-increasing numbers of asteroids. You do get an extra life every 10,000 points, but that's about as exciting as it gets. The only reason I don't rate even lower on this criterion is that learning to handle your ship accurately is something of a fine art.

Controls: 6
A little odd, but effective. The oddity comes in the fact that there's so much duplication: all four of the A, B, X and Y buttons do the same thing -- fire -- while so do all three of up, L and R -- activate the thrusters. Rotating uses left and right on the joystick. So, only four actual controls to learn, but nine possible buttons to use them with!

Graphics: 7
Rather nice, and suitably retro-looking. There's a static background of Jupiter, red spot and all, while the rest of the graphics are reasonably good imitations of real vector graphics. Your score, current level and number of ships remaining are clearly shown at the top of the screen, and it's nice that your ship is blue, to distinguish it from the white asteroids. I'm not sure about the multicoloured bullets, though!

Sound: 6
As usual, it's much too loud with the official GP2X headphones, but on this occasion the problem is exacerbated by the fact that the volume controls do nothing. That makes Vectoroids2x entirely unsuitable for playing anywhere you can't be noisy. The music itself is a little frantic, but it does the job. Other sound effects are basically bloops, but that's okay for a retro game.

Documentation: 4
Not very good. The original readme is included, but there's no specific GP2X documentation at all. Nor is there any on-screen help in the game itself. Admittedly the game is very simple to pick up, but it's a slight disappointment.

Completeness: 9
Loses a point for the documentation issue, but otherwise everything seems to be there. I can't really penalise it for not having hyperspace, as the PC version this is based on didn't have it either!

Overall: 6
Vectoroids2x is a solid, playable take on the Asteroids genre. It's nothing all that special, and though fairly polished doesn't deliver anything new -- though in fairness, it doesn't try to. If only the volume controls worked, it would have scored 7, and would have been a good game for playing in short blasts on the bus.
Posted by Logan at 20:05