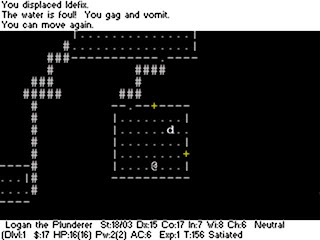 Description
CaduHack is a version of NetHack, the best-known of the "roguelike" sub-genre of role-playing adventure games. These, named after an early title actually called "Rogue", are at their simplest dungeon-based quests: you descend into the catacombs, acquiring treasure and weapons as you go, and try to get hold of a great treasure. In NetHack's case, this fabled item is the Amulet of Yendor. Winning the game is accomplished not simply by escaping the dungeon (you can aim to do that, but it isn't really a win) but by "ascending": fulfilling all the requirements of your god and thus being raised to the status of demigod(dess) yourself.

This is a turn-based game, something not very common nowadays but which it's important to remember. In the middle of a desperate melee, you can find yourself making decisions in a snap, when in fact you have time to stop and think. The basic graphics actually help enhance the role imagination plays in NetHack, and the pressure is certainly very real. One major decision enhances that: if you die, you die. You have just the one life, and though you can save your game and carry on later, you cannot return to a previous save point. On top of all that, you can choose your starting role (eg Barbarian, Knight, Tourist, Valkyrie), race (eg dwarf), alignment (eg lawful) and gender, all of which can have major implications.

Addictiveness: 9
NetHack itself gets a 10 here, easily. The only reason CaduHack doesn't is that the (inevitably) slightly fiddly control system can become a pain if playing for long periods of time. Either way, this is one of the most extraordinarily involving games ever made. The basic graphics and lack of sound don't matter one jot, and the vast variety of monsters, friendly creatures, other humans (shopkeepers, for example!) and magical beings which populate the huge playing area means that you're never going to find yourself playing exactly the same game twice. (There's a random element to the maze generation anyway.)

Depth: 10
NetHack is an absolutely massive game. Many people play quite regularly for years before winning through, and some don't ever manage to do so. You can have quite a good time just sticking to the upper levels (the Dungeons of Doom) and doing a straight dungeon-crawl, but if you do that you'll be missing out on the quests, alternative planes of existence and much else besides that give this game its enormous longevity. Even if you do manage to ascend, you can try again with another type of character, set yourself challenges (eg never eating meat) and much else besides.

Controls: 7
NetHack was written for computers with a full keyboard available, and there are an awful lot of commands, so inevitably things aren't perfect here. CaduHack does about as well as could be expected, though: all the buttons are made use of, and there are several commands which require two buttons to be pressed simultaneously: for example L+B will zap a wand, while L+Y equates to "kick". Start will bring up a menu offering a choice of the many other commands: from here (and sometimes a submenu or two) you can adjust armour, engrave "Elbereth" (there's a hint for you...) and dip things in water. I couldn't find anything that wasn't there somewhere.

Graphics: 6
Roguelike games don't generally go in for flashy graphics, and NetHack certainly follows that tradition. There are two main options for display: you can either use a set of "tiled" graphics, in which you get a teeny tiny picture of whatever's on a square (eg an open sack of gold), or you can go the old-school route and use ASCII graphics. With this second option, everything is shown with an ordinary ASCII character: you appear as an @ sign, canines as various colours of d, and so on. Many players -- including me -- prefer the simplicity of the ASCII look. None of the three text sizes is ideal, but they're all useful at times.

Documentation: 7
Reasonable. There's a pretty good help option in the in-game menu, as well as two readme files: one from Dzzz's original GP2X port, and one explaining Cadu's enhancements. You don't get the very detailed in-game guides available on "computer NetHack", however, so I probably wouldn't recommend this version to absolute newcomers. The internet is absolutely stuffed with guides, spoilers and the like for NetHack, so if you want to learn then that's the place to look.

Completeness: 9
One or two bugs have been reported by users: for example, an OHH reviewer mentioned that the game hung when they tried to drop 30 items on an altar. However, that seems to be about it; I think the level of documentation included is acceptable for this port so won't knock anything off for that.

Overall: 9
CaduHack really is about as good a port of NetHack as anybody could reasonably expect on the GP2X. I thought quite seriously about awarding it 10 for that reason, but there's no doubt that the fiddly controls do have a small impact on its playability. Nevertheless, this is a wonderful game to be able to take with you, and I would urge everyone who values atmosphere and imagination over big explosions and blinding eye-candy to keep it on their SD card. Highly recommended.
Posted by Logan at 19:24