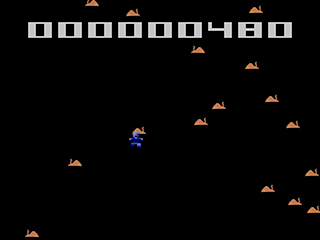 Description
This is one of the newest games available for the GP2X, and is a very simple arcade affair. You play a little blue stick man, who is being menaced by waves of approaching hamsters. At various speeds they move down the screen, going from side to side while they do so. The game continues until you come into contact with a hamster, at which point it's game over.

Addictiveness: 4
It provides some ultra-retro fun for a little while, but the lack of a high score feature means that even the usual "can I beat my previous best?" option is missing unless you have a sensationally good memory!

Depth: 2
Don't be silly. Moving around and avoiding hamsters is the entire game.

Controls:5
"FIRE" (the A button) starts the game, but then doesn't actually do anything! All you can do is to move around the screen with the stick. That's all, folks. Start quits the game (without warning) whether you're in the middle of a game or not.

Graphics: 5
There's a fairly long pause before the game starts, so don't think that the black screen means it's crashed. You then get a splash for the Crap Games Combo contest (which is awful, as it should be) and then a title screen that looks like it's escaped from 1983. A message advises you to "Press FIRE to play" and then you're into the main game. Ever played a mediocre Atari 2600 game? If so, you'll be right at home: I'd be amazed if the look weren't deliberate, as it really is very close, and though everything's very basic it's not actually too crap. (Sorry!)

Sound: 3
We're in the days of dodgy old consoles, and it sounds like it too. Only one thing is authentic GP2X, which is that the default volume blows your eardrums when using the official headphones. Thankfully the standard volume control works, though you'll need to press it plenty of times. The actual sound... well, it's bleeps and bloops, and very basic ones at that. They fit the graphics, but they'll probably drive you mad fairly quickly.

Documentation: 3
Virtually nothing: the readme doesn't tell you much beyond that Hamster's Escape was "made in one afternoon for the Crap Game Combo 2011 Contest" -- and I thought that was just a Spectrum thing! The text on OHH isn't much better, simply advising you to run from evil hamsters to stay alive...

Completeness: 5
Given that this game is supposed to be crap, I suppose a low score here may actually be a good thing! It's not exactly deep, and the documentation is awful, but then it's so simple that it doesn't need much explanation. The core game may be utterly simple, but it's there! A high score feature really would help a great deal, though.

Overall: 4
I am bearing in mind what this game was written for, but there's no getting away from the fact that Hamster's Escape is not a very good game. Even disregarding the dodgy apostrophe in its name, I really can't see anybody playing this for more than a few minutes without getting bored. It's like Centipede without the depth!
Posted by Logan at 20:40