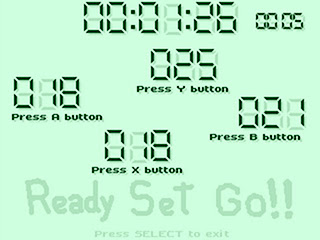 Description
Sometimes simple is best, and the brand new game Liquid Counter (yes, there are still GP2X games appearing in 2012!) attempts to bring back the glory days of LCD handhelds, a little along the lines of Game & Watch consoles. The object of the game is very straightforward: you must press a certain button, or tap the screen (on an F200) as many times as you can within ten seconds. The tap version is one-player only, but the button options allow one to four players to compete. A countdown timer and a running total of score(s) are shown, and the top score flashes at the end.

Note that this game does not quite come ready to run. Two sets of runtime are provided -- one for official firmware, and one for Open2x -- and the appropriate one must be unzipped so that the runtime folder sits next to (not in!) the game folder.

Addictiveness: 6
More so than you might think, especially when it comes to multiplayer gaming. On your own, you might play this a couple of times and then shrug and move on... but when the competitive spirit is running hot, that fabled "I'll beat you all this time!" feel is very much in evidence.

Depth: 2
It would be difficult to find a less deep game than this one, given that "push a button as fast as you can" is pretty much the entire object. It only scores as high as 2 because of the multiplayer and tap options.

Controls: 6
The joystick selects which game you want to play. The A, B, X and Y buttons are the ones the players have to press. It's a bit of a squash with the full four, but probably better than trying to make others use the volume controls, trigger buttons etc.

Graphics: 6
They may be monochrome and very simple, but if the aim of the programmer was to convey a sense of old-fashioned LCD gaming, then that aim was met. The claim of "beautiful" in the OHH description is over the top, but "retro aesthetic" certainly isn't.

Sound: 3
Beeps. Squawky, basic beeps. Not unbearably annoying, and probably true to the game's feel, but they don't really add much.

Documentation: 4
You can add several marks here if you speak Spanish, since there's a decent readme (well, "leeme") in that language. Unfortunately, there's no English documentation at all beyond what's in the game. Thankfully the brief instructions included on screen are enough to get you started.

Completeness: 6
The game works, but it's still a bit rough around the edges. I'd like to see an English readme, a level select, and a mute option. A combined, and ready-prepared, runtime folder would be welcome, too.

Overall: 5
Liquid Counter is a nice idea, and things like Game & Watch emulators have done quite well on the GP2X. However, it's too lacking in features, and not quite polished enough, to score more than an average rating.
Posted by Logan at 02:56