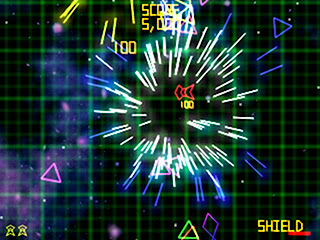 Description
Vektar is a shoot-em-up game based loosely on that old classic, Asteroids. You fly a ship around a screen populated by rocks, ships and so on and blast them to bits. There's a time limit in certain levels, and you have a limited amount of shields to give you brief protection against damage. When you beat a set of waves (there are bosses, of course) another and more extensive level set will be unlocked.

Addictiveness: 8
Pretty good. It is a little bit frustrating at first if (like me) you're not particularly adept at games like this. (Memories of the original Defender, and its BBC Micro clone Planetoid, still haunt me.) However, Vektar is so well made that once you do get into it, the game grows on you greatly. It's not particularly difficult to make it onto at least the lower reaches of the high score table, which helps here.

Depth: 6
The game isn't astoundingly deep, but a reasonable amount of thought seems to have gone into the level design, and it doesn't suffer from having level after level that's nothing more than a simple rectangle. There's also an element of depth in learning how to use the power-ups, some of which are more obvious than others. You also need to judge your shooting, since (in what I think is a very nice touch) these too can be destroyed by your zapping!

Controls: 7
As with Asteroids itself, it can take a little time to get used to controlling your ship in Vektar. Stick left and right rotates you, up and down control thrust and braking, while holding down Y raises your shields. Pressing Select and Start together brings up a pause menu that allows you to continue, quit entirely or begin a new game. In the menus, you can use X to bring up the quit menu, though here you get slightly insulting messages if you leave. (Remember Quake doing that?) I wasn't entirely thrilled with the high-score entry, which worked in the usual "three initials" way but seemed a little imprecise.

Graphics: 9
These really are excellent. If you've ever played a Vectrex console (or at least an emulated one) then imagine the graphics from that, brought into the 21st century and given a beautiful colour-filled makeover. There are explosions everywhere, but even with heaps of things happening at once the animation remains decently -- if not quite perfectly -- fluid, something so important in a fast-moving arcade game. Little touches such as the angular font used for the high score list, and the "fuzzy" look in what you might call "attract mode" are welcome too.

Sound: 7
As usual, the default volume perforates your eardrums if you're using the official GP2X earphones, so you'll want to turn it right down. The music is provided by means of .ogg files, and if you do a bit of fiddling about (which will require a little internet research) you can replace the rather predictable techno-y tunes with whatever you prefer. Still, there's nothing wrong with the default ones.

Documentation: 3
Surprisingly little; really, a game that takes up almost 60 MB of your SD card ought to do a bit better than this. You have to work out a number of things, not least what the power-ups actually do, by trial and error, and while I'm all for a bit of mystery and surprise in a game I think this goes too far. Possibly the boxed commercial version had a manual, but even if it did, that's no use here!

Completeness: 9
Loses a point for not having proper documentation, but otherwise it's all here, and as it's the "registered" copy you're not going to find yourself booted out halfway with a demand to buy the full game -- since this is it!

Overall: 8
Vektar is a very good game. I might have rated it 9 had it had in-game help, and I could imagine some people marking it as a perfect 10. For me, it's a little too difficult to score quite that highly, and it does take up an awful lot of card space (though over a quarter of this comes from two thinly-disguised and mildly annoying videos). Still, it ends as a very creditable 8, and those who like their old-school arcade shooters will lap this up.
Posted by Logan at 16:28