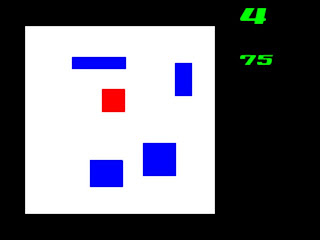 Description
Based on a Java game of the same name, Escapa is a reflex/concentration-centric arcade game. The mechanics are very simple: you control a red block (with the stick) and four blue blocks of differing rectangular shapes move around the board. If your block touches any of them, or the edge of the playing area, then it's game over. Every ten seconds, the game speed increases. The time you've stayed alive is shown (in seconds) and there is only one object: keep going as long as possible!

Addictiveness: 5
Frustratingly hard to start with, and then just very hard. That stops you wanting to go back more than a few times -- but for those few times you will get a feeling of achievement if you happen to beat your previous high score. (These are ordered simply by the time you lasted, in seconds.) I doubt you'll keep this game around for all that long, as there's no real reason to return after a while.

Depth: 2
Given that you're doing well if you last more than 20 seconds, there isn't a lot of this! Only the one level, and no options to change anything.

Controls: 7
The basic controls are simple enough: you just use the stick to move your red block around. Selecting from the main menu is also easy (see Graphics, below). The high score entry is a little unnecessarily complicated, though, and does make Escapa! feel slightly less wieldy than it might. If you have the appropriate hardware you can also play with a USB mouse, but as I don't I can't test that.

Graphics: 5
Very simple indeed: a white playfield, the red and blue blocks, and score and "Game Over" messages in a virulent light green (that last one wasn't a great choice, in my view). Excellent, smooth animation. The high score entry page is white on black, but unfortunately uses a "show-off font", by which I mean one that looks all fancy and in theory sounds impressive, but in practice is too hard to read. I do like, though, the menu screen, which apes the game mechanics: you move a red block to one of four blue blocks representing Play, Highscores, Credits or Quit.

Sound: 7
This is reasonably impressive. The background music is (again) a repetitive techno-style piece, but it has a vaguely eerie feel that somehow fits quite well. Mind you, it's likely to drive you mad if you play for more than a few minutes at a time! There is also some decent speech, which makes up for the absence of any other sound effects. (The tune plays continuously.)

Documentation: 6
Surprisingly for a three-hour contest entry, there's an adequate readme, containing the basic controls and aims (of what is admittedly a simple game) and contact details for the author. It's not exactly "The Dark Wheel" (the novella that came with the original Elite) but it does a job.

Completeness: 6
The credits state that Guyfawkes (and musician Donskeeto) finished the game in two hours and 45 minutes, so it's a little churlish to complain too much. There certainly are things that could be added, such as sound effects (and the option to turn off that damn music) and an easier difficulty level. Perhaps also there could be custom levelsets with different types of block design and/or movement. But the core game is there, and it works.

Overall: 5
An average rating for an average game. Escapa! is an interesting challenge for a little while, but most people will find that interest palls after that. It's well presented (with particular points for the smoothness of the animation) but few people will go "wow!" upon seeing it. One of those "play for a bit then delete" games.
Posted by Logan at 15:09