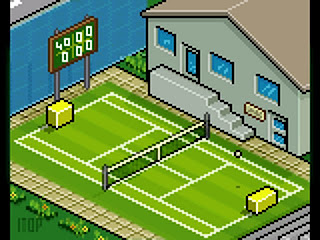 Description
Sponge Blob Tennis is, to my knowledge, the only (non-emulated) tennis game available for the GP2X, so it's a relief that it's quite a well designed program. As its name implies, you control a cuboid spongy blob, and whack a ball back and forth over an isometric tennis court. The game implements most of the basic features of tennis, though not tie-breaks. Notably, it runs smoothly at CPU speeds as low as 80 MHz, making it excellent for battery-powered sessions on the bus or train.

Addictiveness: 8
This is not an easy game to get started with, because of the difficulty of visualising the ball's movement in three dimensions on an isometric court. However, there's a real feeling of satisfaction that comes with even scoring your first point, let alone the much harder task of winning a game. I like tennis games anyway, so perhaps I'm biased, but I think Sponge Blob Tennis has what it takes to keep you coming back for more.

Depth: 6
More complex tennis games can have a great deal of depth, but this one is just too simple to score any higher. The main thing to learn is how to use jumps, which depending on your position cause either lobs or smashes. You also have to deal with the fact that the shape of your blob changes as you move -- you can be long and thin, or short and fat, or something in between! The game starts with both blobs AI-controlled; you can take charge of one or both.

Controls: 5
I found these rather fiddly. A and Y toggle AI/human control for left and right blobs. If you choose to control the left blob (and have the right one AI-controlled) you use the joystick to move and left trigger to jump. If you control the right blob, it's X and B to move and right trigger to jump. You're allowed to use (for example) joystick and right trigger, but what you can't do is use joystick and B, which would be my preferred combination. With two players, things get a bit cramped, but that's to be expected. Serving is always automatic, for both AI and human players.

Graphics: 9
I really like the look of Sponge Blob Tennis. It has a very attractive, old-school console, appearance that I think suits the GP2X perfectly. The design of the tennis court is thoughtful, with mown grass, a clubhouse behind the court, a useful digital scoreboard, and so on. It's been thought about right down to the flowers around the edge, and the colours are bright and cheerful. There's a lot to like here.

Documentation: 7
Considering the unfinished nature of the program (see below), not too bad. There's a readme that explains the general principles behind the game, which has slightly uneven English in a few spots but is fairly easily understood; and the control guide that appears if you press Select is comprehensive and reasonably clear.

One bizarre line from the credits in the readme: "Original idea and artwork : An italian artist whose name I ignore (http://itop-edition.deviantart.com/)" I suspect "ignore" is a mistranslation into English, as it's a weird thing to say otherwise.

Completeness: 6
Sponge Blob Tennis is rough around the edges, as its 0.1 version number would suggest, but it's a playable game even as it is, and it can be good fun. What might have been, though... with better AI, sound, manual serving and tie-breaks, this could perhaps have become one of the truly great GP2X games.

Overall: 7
This was a tricky game to rate, because it has so obviously been left unfinished, but what is there -- especially the graphics -- is quite polished. I would recommend Sponge Blob Tennis, so long as you don't download it under the illusion that what you're getting will be a fully-fledged tennis sim. As Rouzic says in the readme, it's really more of a cross between tennis and Pong.
Posted by Logan at 01:58