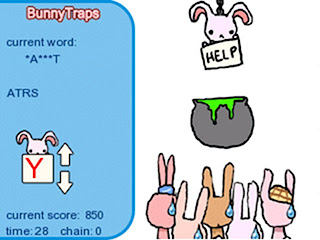 Description
Bunny Traps is essentially a version of the age-old Hangman pencil and paper game. You must guess letters that make up a hidden word, and for each you get wrong your bunny moves closer to his untimely demise. There are two game modes: Challenge, which is a ten-stage progression, and Arcade, in which you play until you die (well, until the bunny does). Only dangers which have been unlocked in Challenge mode are available in Arcade mode. Arcade has three difficulty levels, and even the ability to use a custom word list by editing a text file, though each of these must be between six and 14 characters inclusive. You score in a slightly convoluted fashion: you gain points for correct guesses, lose them for incorrect guesses, and can win bonus points for "chains", in other words multiple correct guesses with no incorrect letters intervening.

Bunny Traps has an odd clause in its licensing, as follows: "This game may not be distributed as a means of making profit, for example advertising or selling a GP2X with Bunny Traps being mentioned or being included on a compilation CD/DVD which is sold for profit. Bunny Traps is a freely available game and it should stay that way!" Taken literally, this would mean that selling your GP2X on eBay with the phrase "You can play a great word game called Bunny Traps on this console!" would not be allowed. Very strange...

Addictiveness: 5
I really like Hangman, and was expecting Bunny Traps to be just as addictive. Unfortunately, it isn't. The reason for this is its difficulty. On Challenge mode, you are allowed only five incorrect guesses before your bunny is doomed, and when on the very first level you are confronted with words like "piazza", this really is too little. I could see many people giving up on the game quite quickly because of this.

Depth: 6
I have a bit of a prejudice against games where you have to unlock levels, going right back to Lemmings days. Maybe this stems from my background in the Grand Prix Legends racing sim, which gave you all the tracks and all the cars straight away. Still, the Challenge mode is okay for what it is, and the three difficulty levels in Arcade are useful enough as a means of holding the player's interest.

Controls: 4
Odd. In the main menu, you're told to press Start to choose an option. This is strange in itself given that B is more usual, but actually it's not Start you need! The instructions are incorrect: in fact, X takes you to a submenu, while B is the cancel button. Once you manage to display the actual on-screen help this is given correctly, but still... in the game itself, yo use the stick to choose letters, L and R (not left and right on the stick, for some reason) to skip five letters back and forth, X to select a letter and Start to pause, and potentially quit.

Graphics: 7
The presentation in Bunny Traps is generally very well done. There's a distinctly cartoonish feel, starting with the opening screen with the bunny yelling, "_ELP/_E" (HELP ME) in true Hangman style. This mark would probably have been an 8 had it not been for the rather squint-inducing high score entry screen -- larger text here would have made a considerable difference.

Sound: 6
Much too loud for headphones as usual... a rather odd, speeded-up, bouncy tune to start with. You can choose in the game menu whether to have the music and/or the sound effects switched on. I suspect the music will drive most people mad after a while. The crowd cheers when you get a word correct are cute, though, it has to be said.

Documentation: 8
I was impressed to see a "How To Play" option in the menu, and this seems to explain the game in plenty of detail. I can't imagine there are too many people out there who don't know Hangman, but even if there are they should know what they're doing after reading this. There's also a readme file with the package, which you'll need to read if you want to know how to set up a custom words file.

Completeness: 9
The game is basically done: the core works, there are a decent number of levels, there's a good help screen and nothing seems to crash.

Overall: 6
Bunny Traps is an early GP2X game, from late 2005, and in truth sometimes it shows. The somewhat bizarre choices for the controls, the overly difficult Challenge level (eg on level one, "filial" -- five wrong guesses is simply not enough) and the eventually maddening music are examples. On the other hand, the cartoonish visuals are very well and amusingly done, and the ability to add your own word list in Arcade mode is most welcome. It's another game that would probably have been wonderful with another few weeks' work, but which as it stands has a few too many rough edges.
Posted by Logan at 20:50